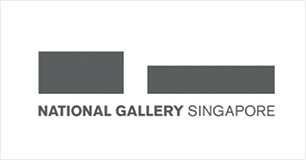 In a very minimalist, abstract approach, National Gallery Singapore’s new logo visualizes two iconic buildings, Singapore City Hall and former Supreme Court building, which are currently being refurbished in order to open as the recently renamed “National Gallery Singapore” in October 2015. The logo was designed by Asylum, an award-winning creative agency based in Singapore.
“Distilling the silhouette of the two buildings’ architecture, the logo took on the form of two rectangular blocks which can be interpreted in every imaginable way – two building blocks, two dialogue boxes, two platforms; two plinths or simply two spaces for visual arts.” said Chris Hall from Asylum.

The two rectangles are accompanied by the new name National Gallery Singapore written in the typeface Akzidenz-Grotesk, which was originally released in 1896, and which is considered a milestone in typeface design. It was the first sans serif typeface to be widely used. Nothing groundbreaking in today’s design, but classic and elegant.

Some say the new logo is a visionary masterstroke, others consider it a bit too minimalistic and rather plain. Only two days after its publication it has been turned into a hoax by online bloggers. But no matter which point of view we take on, one thing is clear: the new logo made its way into the media headlines.

The redesign – and the controversial reaction to it – reminds of the Bauhaus design and architecure style which started in the 1920ies in Germany, a style that is radically reduced, and which – what a surprise! – also was very controversial at that time. Now Bauhaus is considered the most important influence in today’s design world.

National Gallery Singapore will show two permanent exhibitions: the DBS Singapore Gallery, sponsored by DBS Bank with the impressive amount of SGD 25 million, featuring works from the nation’s art history and its many influences, and the Southeast Asia Gallery. Aside from the permanent displays there will be contemporary art presentations and collaborations with leading museums worldwide.