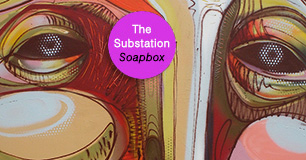 Processing by ZERO (2013). One of the works up for auction at the Septfest 2014 fundraising exhibition.

Chelsea Chua: Which art events in the gallery have left the strongest impression on you?

NEI: I’ve been coming to The Substation since the early 90s. Back then there was really no other place to see experimental art, and artists such as Zai Kuning, Amanda Heng, and Lee Wen were exhibiting and performing regularly in the gallery. Unfortunately I can’t remember the names of those events anymore, but I definitely still have very clear memories of the work they did, and the strong impact of those works at the time. Lim Tzay Chuen’s Space Alteration #7 in 2001 sticks out as a particularly bold work – that was when the gallery was literally altered

In recent years, the works that have made the biggest impression are actually the quieter works by young artists that engage with the audience on a deeper level. During my time as Artistic Director, I’ve been fortunate enough to see many of these young artists present their first solo shows in the gallery. Some outstanding ones include  \\: The Singapore River as a Psychogeographical Faultline by Debbie Ding (2010), Hall of Mirrors by Bruce Quek (2011), and Rethinking Music by Bani Haykal (2012).

CC: Do you think the space has evolved over the years?

NEI: I think the way in which artists think about the space has changed. Young artists now rarely use the space in a straightforward sense. I’m sometimes bowled over by the creativity and vision of these artists in transforming the gallery into something completely different. For instance, Kent Chan did Temporary Repositories last year, where the space became a DVD library; a few months later, the gallery was completely blacked out for Kin Chui’s Performing Coloniality. It’s wonderful to see artists uncover the potential of the space to show off their work to full advantage.

NEI: This year’s Septfest celebrations are about bringing the focus back on our building and the community. Over the years, time has taken its toll on The Substation Gallery, and it’s really in need of repair, so we’re organising two major events to raise funds for this. We’re hoping to hit a target of $30,000. To do this, we’re organising a fundraising exhibition, where Singapore artists have donated over 40 artworks. The works will be sold by silent auction. We’re also holding our very first crowdfunding campaign, where supporters can donate as little $5.

We’ve also embarked on our very first yarn bombing project with Momshoo, and the two front pillars of The Substation’s building are now covered with knitting! It’s a really spectacular project that brought more than 200 members of the public together over several weekends to create these pieces.

Septfest 2014 runs from 1 to 27 September at The Substation.
For full details on the events, please visit substation.org/septfest.