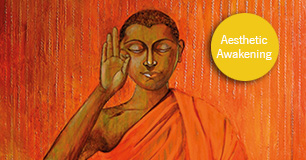 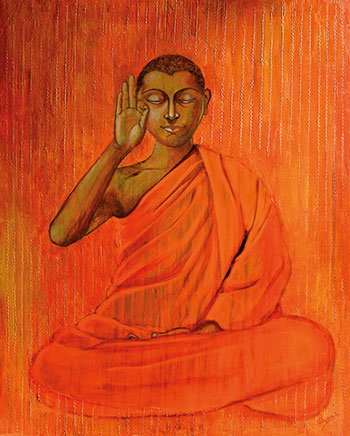 Symbols were the channel through which Gautama Buddha was first represented. The debatable origins of the Buddharupa or the anthropomorphic representation of the Buddha is believed to have taken root in the 1st century AD. And the rest is history, or art history, so to speak. There are numerous manners and tendencies through which an image can be deciphered. One such tendency is to observe it from the point of its cultural biography, which can spontaneously and quite carelessly entail the arena of contemporary art.

“Even as the images hang on to their distinctive insignia, they may find themselves carried off to new places, where they encounter new audiences, who may not know or appreciate their earlier significances. Or, even staying in their original locations, the images may take on new roles and new meanings in response to the changing world around them.” ~ Richard Davies

Davis’ reference to ‘new roles’ and ‘new meanings’ in a world that is constantly going through some sort of a change (due to factors such as globalisation and evolving communal and individual beliefs and identities) can be immediately applied within the scope of the substantial level of personalisations and localisations that the image of the Buddha has experienced.

One intriguing personalisation is Singapore-based artist Sheena Bharathan’s charismatic portrayal of Gautama Buddha in her recent artwork titled Serene. The Buddha is progressive in the act and art of teaching and disseminating the energy of knowledge and of intellectual deliberation and exchange. This pursuit is signified by the vitarka mudra on his right hand, which is superficially-defined as the gesture of debate or discussion. On his left hand, he presents the avakasha mudra, which is referred to as the gesture of leisure.

Sheena, who was born in Kerala/India and previously based in Dubai, is a child development specialist with ten years of experience in the profession. Relocating to Singapore four years ago was a milestone in her life, as it unexpectedly rejuvenated her pursuit in the arts and offered her the timely, golden opportunity to be trained under some reputed artists in the Lion City. Sheena shares with delight: “Human forms are a central theme in my artworks. I intend to create a feeling of calmness using colours and varying degrees of simplification when depicting my figures.”

In a world of immense generalisation and of democratic modernity, it is astounding to recognise the almost miraculous persistency of the visual integrity and the undeviating legitimacy in the representation of the authoritatively introspective image of the Buddha; an image that instantly serves as a reminder of the most fundamental formula to success in human life – daily meditation. Sheena’s Serene is indeed an effortlessly-intuitive manifestation of this all-healing, magnificent formula.