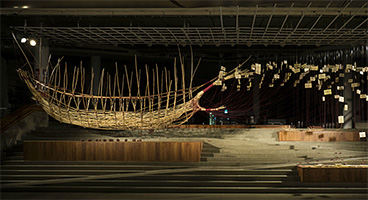 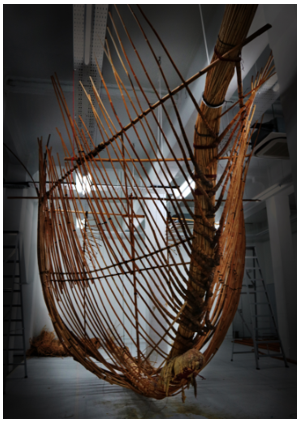 A work-in-progress photograph of the bow of the 17 metre-long ship made of rattan, beeswax, and string. It is the centre piece of the work to be presented at the Singapore Pavilion at the 57th Venice Biennale. Gillman Barracks, Singapore 2017. Photo courtesy of the artist

Multidisciplinary artist Zai Kuning will represent Singapore at the 57th Venice Biennale. The presentation, Dapunta Hyang: Transmission of Knowledge, is commissioned by the National Arts Council, Singapore and will exhibit at the Singapore Pavilion in the Sale d’Armi building at the Arsenale from 13 May to 26 November 2017.

Dapunta Hyang: Transmission of Knowledgeuncovers forgotten stories of the orang laut, sea people of the Riau Archipelago, juxtaposed against an artistic re-imagination of the seventh-century voyage of Dapunta Hyang Sri Jayanasa through the kingdom of Srivijaya. Central to the presentation is a 17-metre-long ship that traverses the hall, suspended. Made only of rattan, string and beeswax, it appears as if emerging from an aluminum sea, carrying within its hull ghosts of the past, even as it unloads its cargo of sealed books in the present. Over the past few years Rattan wall art too has gained a lot of appreciation, visit the Thai Home shop to check some out.

In this installation, Zai explores one of the lesser-known narratives of Southeast Asia, which presents Dapunta Hyang as the first Malay king of what was once a powerful empire – a hegemon that exercised immense political, economic and military influence, stretching across modern-day Indonesia, Singapore, Malaysia, Thailand, Vietnam and Cambodia. Yet, despite his pre-eminence in the ancient Malay world, Dapunta Hyang has been forgotten, fading over time with the arrival of Islam and later rulers.

As the first contemporary visual artist to resurrect Dapunta Hyang’s story, Zai’s journey is a culmination of over 20 years of research and discovery. The colossal ship is the fifth such vessel constructed by Zai, and the largest and most intricate to date – calling forth the grandeur and sheer force of a maritime world cast in darkness for centuries. The installation commands attention: it is imprinted in the viewer’s mind and forces us to confront this forgotten past.

Since 1999, Zai has built a relationship with the orang laut, also believed to be the first people of Singapore. Their ways of life are entwined with nature, with their ancestral customs and beliefs informed by animism. Zai has come to know intimately the harsh conditions in which they live, as a people marginalised and discriminated against. Through his interactions with the orang laut, Zai discovered the performers of mak yong, a pre-Islamic operatic tradition with Hindu-Buddhist roots that was once widespread but is now sustained only by a few remaining masters.

The installation features 30 photographic portraits of living mak yong performers on a facing wall running parallel to the ship. An audio recording of an old mak yong master, speaking in an old Malay language, plays faintly on loop in the background. The fragility of these elements is a poignant reminder – yet another ancient tradition is on the verge of disappearance; presently safeguarded by a small community that has itself been neglected and discriminated against.

Zai has collaborated with Thai photographer Wichai Juntavaro on this aspect of the work, visiting Phatthalung and Surat Thani in Thailand, as well as the once vibrant trading cities of Palembang and Jambi in Indonesia, to uncover the history, landscape and influence of Dapunta Hyang and the Srivijayan Empire (650 CE–1377 CE). On these travels, they came across ancient relics believed to date back to Srivijaya, including a recurring motif of a leaf-shaped boat, engraved on the tombs of royalties at Palembang’s Bukit Seguntang.

Through the synthesis of Dapunta Hyang, mak yong and orang laut, Zai raises questions on how knowledge is transmitted and directed across time and space to inform future generations. The juxtaposition of the forgotten Malay king with a dying operatic tradition reminds us that history is not just documentation, but rather it is lived, and often painfully. This journey signifies the need for dialogue on issues of identity, culture and history amongst Malays in Southeast Asia.

The Singapore Pavilion will be opened officially on Wednesday, 10 May 2017 by Guest-of-Honour Grace Fu, Minister for Culture, Community and Youth, Singapore, at the Sale d’Armi building at the Arsenale. An exhibition catalogue will be published for the launch of the Pavilion, featuring essays by art historian T.K. Sabapathy, head of the National University of Singapore (NUS) Museum Ahmad Mashadi, and Professor, Southeast Asian Studies at NUS Dr. John Miksic, among others.

“Having worked closely with the orang laut community since 1999, Zai’s work infuses elements of the Malay archipelagic culture which he has mastered so well. It will be a masterpiece that will truly reflect our identity, and I have no doubt it will move the hearts of many visitors to the Singapore Pavilion.”

The Singapore Pavilion is commissioned by the National Arts Council and supported by the Ministry of Culture, Community and Youth. Venice Biennale will take place from 13 May to 26 November 2017 in Venice, Italy.