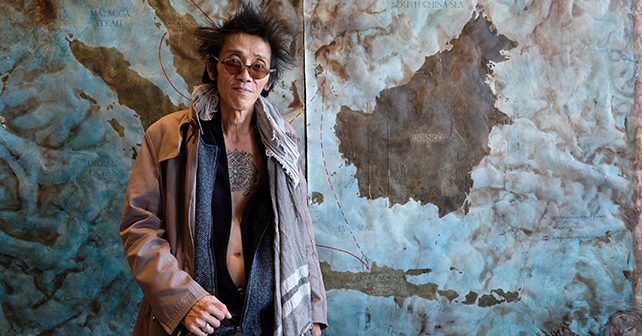 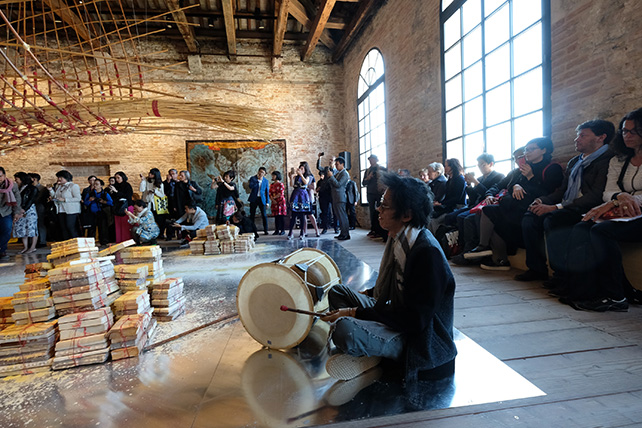 The Singapore Pavilion at the 57th edition of the Venice Biennale was officially opened on Wednesday, 10 May 2017 by Guest-of-Honour Ms Grace Fu, Minister for Culture, Community and Youth, at the Sale d’Armi building at the Arsenale in Venice.

Multidisciplinary artist Zai Kuning represents Singapore with a work that resurrects, reimagines and weaves together his artistic obsession, imaginings, and dreams of an ancient Malay world. Titled Dapunta Hyang: Transmission of Knowledge, it is a culmination of decades of Zai’s research since the late-90s on the forgotten stories of the orang laut (sea people), and mak yong, a dying pre-Islamic operatic tradition, throughout the Riau Archipelago; alongside the narrative of the first Malay king of Srivijaya, Dapunta Hyang Sri Jayanasa.

Zai Kuning is the first contemporary visual artist to resurrect Dapunta Hyang’s story, calling forth the grandeur and sheer force of a maritime world cast in darkness for centuries. Central to the exhibition is the ship – the fifth and largest vessel that Zai has created to date at 17-metres long – symbolic of the Srivijaya empire and its influence over the region. An emblem of knowledge transmission, the ship is made of rattan – an old-world climbing plant common in Southeast Asia – and bound with an old technique using only beeswax and strings. The use of beeswax is especially poignant in this work, as beeswax was used for embalming in the ancient world. Likewise, the red string that holds everything together represents an old binding technique, and symbolises the bloodline of the descendants of Dapunta Hyang. 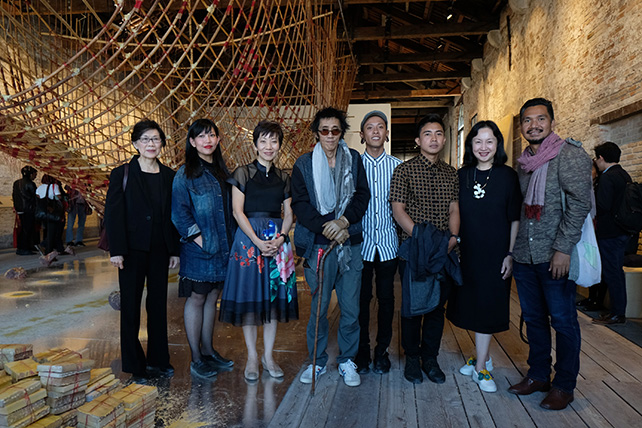 Mr. Paul Tan, Deputy Chief Executive, National Arts Council, says, “Zai’s work opens a thoughtful dialogue on issues of identity, culture, and history in Southeast Asia. We’re sure the work will strike a chord with international audiences, allowing them to better understand Singaporean contemporary art and its perspective in the global conversation. Seeing how Zai and the artistic production team have negotiated and responded to the space of the Singapore Pavilion is admirable, considering the remarkable scale of the ship that is central to – and takes centre stage – in the exhibition. The NAC congratulates Zai and his team, and looks forward to a warm reception from international audiences.”

Zai and his team took almost three weeks to build the ship in-situ in the Singapore Pavilion. Sitting alongside the vessel is a large map depicting the Srivijaya empire’s expansion, destroyed and restored, as if excavated from a shipwreck.

Since 2001, Zai has built a relationship with the orang laut and the performers of mak yong. With the support of a Creation Grant from the National Arts Council in 2013, Zai was able to extend his research on pre-Islamic Malay history and continue his journey to uncover forgotten histories of the region. He has worked together with Thai photographer Wichai Juntavaro to document this process since 2014. In 2016, they returned to Mantang Island to capture portraits of living mak yong performers – 31 of which are presented on stands running parallel to the ship. These portraits are accompanied by an audio recording of an old mak yong master, speaking in an old Malay language that few today understand.

“My decision to tell the story of Dapunta Hyang, the orang laut, and the mak yong opera ties back to the lack of knowledge people have of their history. Thus, there is a need to preserve and tell this story to the world. With Dapunta Hyang: Transmission of Knowledge, I want to remind visitors that our history is a confluence of many different traditions and beliefs. In a time where people are finding reasons to segregate one another, it is important for us to look beyond the petty divides and reposition our perspective to look into what makes us who we are.” 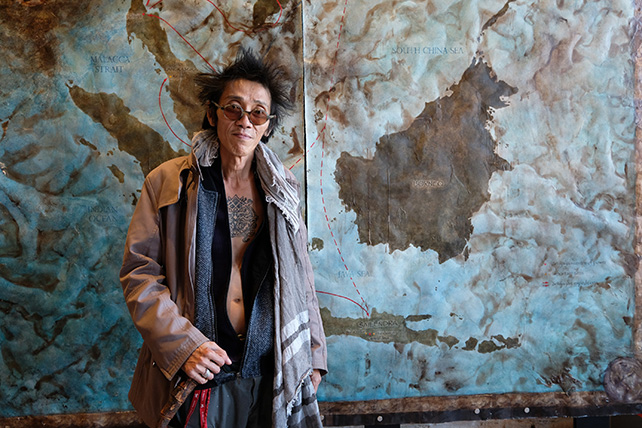