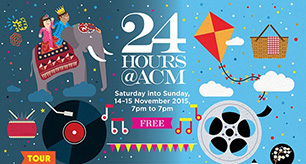 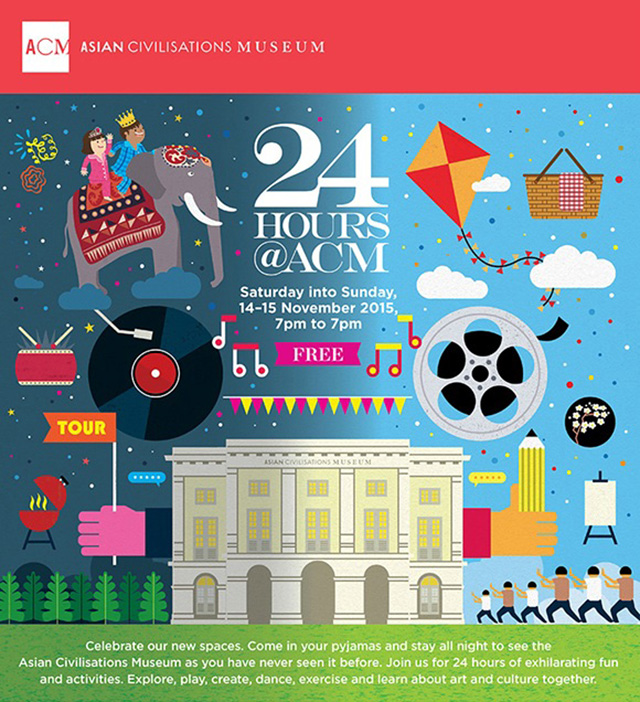 Asian Civilisations Museum (ACM) invites visitors into its brand new and re-imagined spaces that illuminate the multifaceted connections and interactions between Asian cultures throughout history. As a special treat for the opening weekend, ACM is also keeping its doors open all night and inviting visitors to spend 24 hours at the museum.

Brand new spaces to experience the historical connections between cultures

The museum’s comprehensive revamp started in late 2014, and the new architectural parts of it parallel Singapore’s own urban landscape – a mixture of the old and the new; the colonial and the contemporary. With the completion of its first phase, visitors can experience two new elegant wings, a stunning riverfront entrance, refreshed public spaces, and new dining options.

The revamp also begins a fresh take on the museum’s content by showing the richness and diversity of cultures in Singapore and Asia, and the region’s connections with the world through these cultures. The museum’s objects and permanent galleries are now being organised by themes, rather than geographical regions, to reflect the interconnectedness of cultures, demonstrating through the display of many cross-cultural works of art, how places and the people in them have never been static, and are constantly evolving.

The first level of the museum will be broadly focused on Trade and the Exchange of Ideas. Galleries here will display art made for export, reflecting Singapore’s heritage and position as an emporium for global trade. In the new Khoo Teck Puat Gallery, visitors can find the famous Tang Shipwreck Collection – a virtual time capsule of treasures from 9th-century China, hidden from the world till its discovery in 1998. Located in the new riverfront wing, this light-filled gallery will treat visitors to an impressive display of mass-produced and rare ceramics, as well as luxurious gold and silver objects. The Tang Shipwreck is a story of the exchange of goods, ideas, and culture in the region around Singapore more than 1,100 years ago. The Tang Shipwreck forms an important part of the ACM collection, and was made possible by a generous donation from the Estate of Khoo Teck Puat in honour of the late Khoo Teck Puat.

In the museum’s first contemporary art space, visitors will be able to view works by artists in response to ACM’s historical collection. The first artwork on display is Grains of Thought by Singaporean artist Eng Tow. Two large, suspended sculptures inspired by a humble grain of rice. This space occupies the ground floor of another new addition, the Kwek Hong Png Wing, a modern, three-story annex designed by GreenhilLi Pte Ltd that contrasts and complements the colonial neoclassical façade of the 148-year-old ACM building. The 869-square-metre wing is generously funded by the Hong Leong Foundation.

Level 2 of the wing features the Scholar in Chinese Culture Gallery, which focuses on objects associated with revered Chinese scholars, the courts of emperors, and merchants who sought to emulate them. The third floor of this new wing, opening in March 2016, will display the wide range of ceramics produced in China, including a large display of the museum’s comprehensive collection of creamy white porcelain produced at the Dehua kilns.

Other galleries on the second floor of the museum will explore the broad theme of Faith and Belief: The Religions of Asia. The first completed is the Ancient Religions Gallery, displaying early Buddhist art of India, China, and Southeast Asia. Galleries dedicated to Islam in Asia, Christianity in Asia, later Buddhism and Hinduism, and Southeast Asian religions will round out the exploration of faith and belief. This curatorial theme traces the spread and evolution of the world’s many religions and systems of belief found in Singapore.

A new café and restaurant will provide visitors with a variety of dining options from day on into night. Decked out in vintage Singaporean decor, Privé Café @ ACM offers all-day casual dining with alfresco seats by the river; while Cantonese restaurant Empress takes diners on a delicious gastronomical journey, as well as an outdoor waterfront bar.

The ACM app is the museum’s new location-enabled app, which gives visitors relevant content in the palm of their hand. Visitors can walk up to selected objects and experience stories and added content on their mobile device. This enriches the museum experience through interesting discussions, dramatic videos, and questions that inspire close looking and imagination. The app presents information about the museum and collection, as well as a selection of self-guided tours, behind-the-scenes views, and interactive maps.

The ACM VR App allows visitors to enjoy a virtual reality experience of the Tang Shipwreck. Users can download the free ACM VR app, and place their smartphones into a viewer and launch two amazing experiences. One puts you in the shoes of a member of the crew on the ill-fated ship; the other lets you be a marine archaeologist recovering the cargo. The virtual reality viewer can be purchased at the ACM front desk for only $10, with museum admission.

Both apps will be made available from 14 November onwards, and are free for download on iOS and Google Play Store.

To commemorate the completion of the first phase of ACM’s revamp, members of the public can participate in 24 hours of revelry at the museum. We welcome everyone to experience our new spaces all night long.

Kicking off with a pyjama party beginning at 7pm on Saturday, 14 November, the night will feature a barbecue and picnic under the stars, music performances, trivia games, and film screenings. As the clock strikes 12, join the tours of the museum led by Director Alan Chong and the architects, and then party till dawn.

At 7am on Sunday, 15 November, the day starts with tai chi on the ACM Green and a breakfast picnic, after which visitors can choose between craft making, art creation, or following along with guided tours, for a day of family fun and bonding until 7pm.

Multiple phases for a comprehensive revamp at ACM

With the first of new spaces at ACM completed, the rest of the museum’s refreshed permanent galleries and public spaces will be unveiled in phases.

Phase 2 of the revamp will include the opening of a new permanent gallery on level one focused on Trade, and a new gallery on Chinese Ceramics on level three of the Kwek Hong Png Wing. It is targeted for completion in March 2016, with further enhancements to follow.

Dr Chong added, “This revamp at the Asian Civilisations Museum is important to showcase Singapore’s unique position in the world as an intersection of many cultures. Singapore is a reflection and a crucible of the connections between trade and commerce, cultures and religions in this region. For every visitor who is keen to explore and understand the region’s rich heritage, we as Singapore’s Museum of Asia is a good starting point.”

ACM is open from 10am to 7pm daily, and till 9pm on Fridays. Admission to the permanent galleries is always free for Singaporeans and Permanent Residents, and all children aged 6 years and below. From 23 November, all others pay $8 – adults; $4 – students and seniors. Additional admission charges apply for some special exhibitions. For more information, visit www.acm.org.sg.