Sweeping it under the carpet 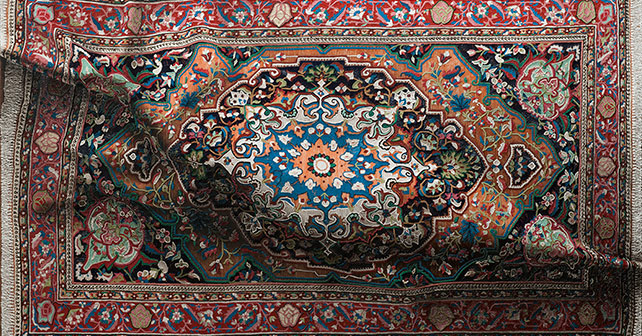 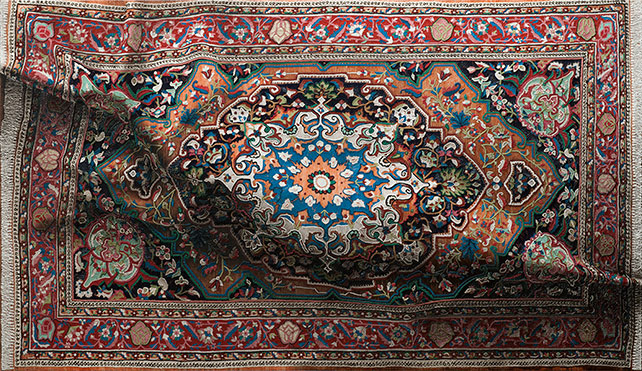 On a cold, snowy evening in early January, I met up with Madrid-born, New York-based artist Antonio Santin in Berlin, where he has been preparing for his upcoming solo show at Marc Straus Gallery in New York in February, as well as for Art Basel in Hong Kong in March. But before that, he will be making an appearance at Art Stage Singapore this month, for the second year in a row. It is a busy and prolific time for Santin, who in the last four years has established himself firmly as a painter to keep an eye on.

Santin is best known for his large-scale, intricately detailed oil paintings depicting Oriental rugs with what one can only assume is a body hidden underneath. The paintings are intriguing and somewhat sinister. But they are also playful, with a deft touch of wry humour. Sweeping something under the carpet is a well-known idiom, and the temptation to conceal a problem expediently rather than seek a thorough remedy is one we are all familiar with. The joke here is that under a rug is possibly the worst place to hide a corpse: by doing so, you have to know full well that the problem will come back to haunt you. But is it a corpse? Is it a game of hide and seek? Doesn’t the person hiding – or being hidden – surely want to be found? As the viewer, you want to look underneath, to uncover the secret.

Santin began his artistic career as a sculptor, before shifting to painting. His first concrete series were figurative works of beautiful girls in strange, dark scenarios. He would always work with friends-of-friends or women he met on the street or in bars. He would talk to them and invite himself to their houses, and assemble the image he would paint of them by going through their wardrobe and intimate possessions.

At a certain point, he began to want to move away from figurative work. One day, as he was exploring images and scenarios for a new painting, he asked the girl to go underneath the rug in her apartment. The sculptural qualities of this image of a usually flat object, suddenly deformed and given volume, immediately captivated him. It also offered the perfect way for him to disappear the figure without entirely dispensing of it altogether. He swept the beautiful girls under the carpet.

Since painting the first rug in the series in 2011, he has continued to develop and refine his technique with a meticulous approach to detail, material, and composition. Rather than using the terms ‘hyperrealism’ or ‘photorealism’ to describe the works’ effect, however, Santin prefers ‘meta-realism’, by which he implies working to achieve an augmented reality. What he aims for is not so much to imitate or depict reality as closely as possible, but rather to mimic its structure and quality through painting. He wants to paint in the quality of the rug’s weave, almost to paint like he is weaving.

The paintings must definitely be seen in the flesh to be appreciated. They are striking and bold yet subtle and intriguing, and when first glimpsed from afar they draw the viewer in. But what is most fascinating is revealed when you can view the paintings from all angles, move from left to right and from close up to further away. Up close, what you see is a canvas thick with dense knots of paint and waves of delineated colour. It is clear that the paint has been painstakingly applied, and you get a sense of the intensive effort that goes into the work.

This detailed impression of the surface, however, gives nothing away of the effect of seeing the paintings from a distance. They are incredibly skilled works of trompe l’œil illusionism, creating the uncanny impression that the rugs – and the bodies beneath them – are actually coming out of the wall in three dimensions. And it is this juxtaposition of detail, materiality and texture at the near scale with the grand illusion and beauty of the whole wherein the magic of these works lies. The spatial disorientation achieved by the fact that Santin’s rugs, though hung on a wall, actually depict the rug as if it were on the floor and viewed from above, further enhance their curious appeal.

It is also interesting to consider the impressive quality, artistry and value of the primary object that Santin has chosen to depict, and his works’ interplay with it. Oriental rugs are a fascinating world unto themselves, imbued with symbolism, mysticism and history. They are handmade by artisans using designs and techniques that are thousands of years old, and passed down orally from generation to generation. As few written records of these techniques exist, no two hand-knotted rugs are ever the same. You can, however, literally read these rugs, since the colours, shapes, images and patterns all carry deep meaning. For instance, for many ancient cultures, the lotus plant symbolises purity, peace, and enlightenment, as well as beauty, transcendence, rebirth and fertility. The image of the pomegranate is another fertility symbol, while a leaf indicates endless regeneration and a peony power.

With his paintings, Santin is depicting something that is already a work of immense artistry. Yet with his meta-realistic reinterpretations, he adds another layer to the reflection on symbols of peonies and lotus flowers. We see a rug bedecked with such images, and under it lies a body, a scarcely concealed secret waiting to be exposed. What can we make of peace and enlightenment, rebirth and transcendence, when this (open) secret is potentially so dark?

Santin has received consistent attention over the past four years for his rug series. He has been featured in Harper’s Bazaar Singapore, BlouinArtInfo, The Huffington Post, and many more. His appearance in Singapore last year was a resounding success, with his paintings listed among the “10 must-see works of art at Art Stage Singapore 2015” by Forbes. 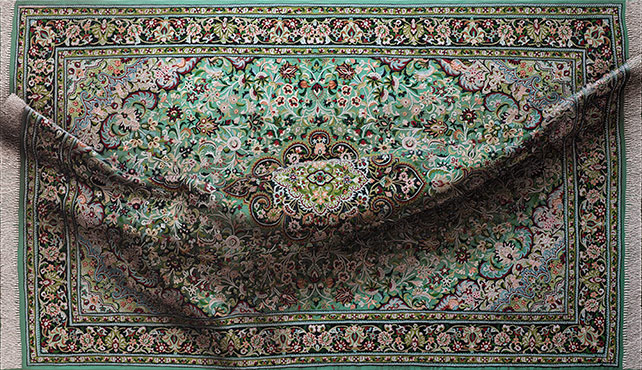 So after the success of 2015, he is returning to Singapore for the fair for a second time, and bringing some of his best. The paintings he will show represent the state of the art of the series, with the artist and his work at their most mature. The main material he uses remains oil paint – and a lot of it – but he has begun experimenting with other materials. The background of ‘Flushing Meats’, for instance, is finished with fine glitter, which plays with the light to achieve an exquisite dynamism to the painting’s surface.

For something so darkly beautiful and mysterious, what sort of title is ‘Flushing Meats’, one might wonder. Santin explains that every day, on his way to his Brooklyn Studio, he passes a wholesale meat company called ‘Flushing Meat Provision Corp’ that appears to be doing a thriving trade. As he reasons, if a meat company can run a successful business with such a moniker, then one of his paintings is surely also up to the task. I am inclined to agree.