The Buddha of Kalidass – Localised by the Personal

J. Kalidass, a remarkable artist with Singaporean-Indian origin, has purposefully indulged in the attempt to identify a delicate sense of spiritual synchronisation, through an almost entirely personal statement in the form of visual manifestations. This, he has achieved with the help of sculptural images of Gautama Buddha (hereafter referred to as ‘the Buddha’), the founder of one dynamic social, religious, spiritual, personal-political, philosophical phenomenon.

Indeed, Kalidass has tastefully taken the liberty to project his inspirations from conventional and historic sculptures of the Buddha, within paintings of a monochromatic or earthen palette, complete with a surreal energy that will instill a sense of ethereal awe within the viewer. He achieves this with the manipulation of optical illusion to juxtapose the individual ideas that his images are endowed with. 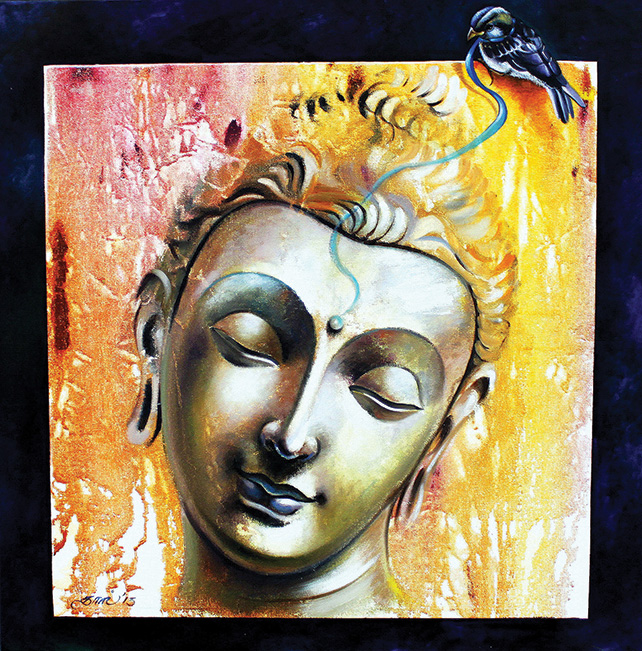 Born in 1974, Kalidass received his initial formal training in the art of painting at LASALLE College of the Arts (Singapore). However, he credits Mr Wee Shoo Leong – a senior artist in Singapore – for his unplanned but fundamental entry into the realm of oil painting. Kalidass is armed with a Bachelor in Contemporary Art from the University of Tasmania (Australia) and has exhibited his artworks in Singapore, Australia, Malaysia, Korea and Hong Kong. In 2010, Kalidass’ creative career was officially launched via his first-ever solo art exhibition with The Gallery of Gnani Arts. It is noteworthy that, in 2012, he was invited by The Gallery of Gnani Arts to be featured in a television programme entitled Destination Art (Channel News Asia), whereby he travelled to Kumbakonam (an ancient temple town of Tamil Nadu, South India) to work with traditional and modern sculptors, in order to create contextual paintings as an aftermath of the trip.

But why has Kalidass chosen the Buddha as his principle motivation for his current collection? “I feel a sense of peace as I paint the image of the Buddha, a symbol of tranquility, and my intention is to enable the viewer to feel the same,” the artist shares, in a calm, confident manner. Clichéd as this statement may seem, it is significant to confess that Kalidass’ depictions of the Buddha exude an awe-inspiring serenity and an almost majestic appeal that are synonymous with the secular image of the Buddha.

The Buddha needs no introduction, even more so due to the overwhelming availability and abundance of printed, published matter on the Buddha himself, Buddhism and its philosophy, in retail or free circulation all over the world. However, the evolution of the image of the Buddha, is indeed another topic, or rather a concern on its own. It sure goes beyond the regular reproductions of the bust of the Buddha that we encounter in numerous interior design portfolios as a key element in completing ‘an Asian eclectic design’.
The Buddha image that we are familiar with today is the result of the culmination of many centuries of aesthetic evolution that was not spared of social and political agendas. The chronological chain commences with the expression of the metaphysical presence of the Buddha by means of symbols during the era of the Mauryan and Shunga dynasties in India (322 – 185 BC). The anthropomorphic image of the Buddha is believed to have taken root at the end of the 1st century AD in northern India. And of course, the evolution of the image continued with historic developments primarily in Gandhara (northern Pakistan), Mathura (central northern India) and Sarnath (Uttar Pradesh, India).

It is significant to note that, currently, Kalidass is being specifically inspired by the Gandharan image of the Buddha, which is based on the Greco-Roman artistic tradition.
We now live in an era of improvisations, whereby certain physical and facial attributes of the image of the Buddha have been localised by every country or culture that embraces Buddhism. In the same spirit, Kalidass’ art, in his current magnificent collection, resonates a silent, celestial tone of spiritual harmony, in another realm of aesthetic improvisation. But this time, the image of the Buddha is being localised, not within a downright socio-cultural context, but within the emotively-political mind of a spiritually-curious artist. Let us celebrate this localisation, all in the venerable spirit of Vesak Day in the coming month.