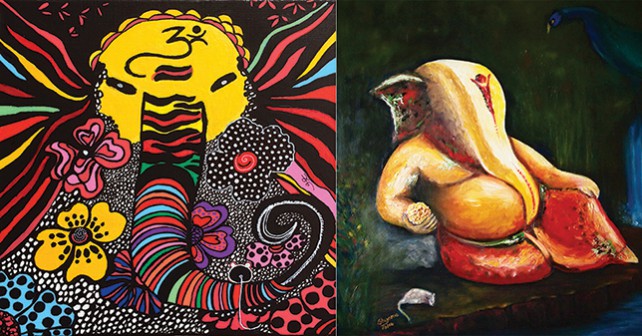 It is time again to usher in another dynamic exhibition of contemporary art depicting the monumental global icon, Ganesha! It was in 2003 that Gnani Arts launched this tremendously-successful series of exhibitions showcasing modern and contemporary art of Ganesha (followed by exhibitions in 2005, 2006, 2009 and 2010). 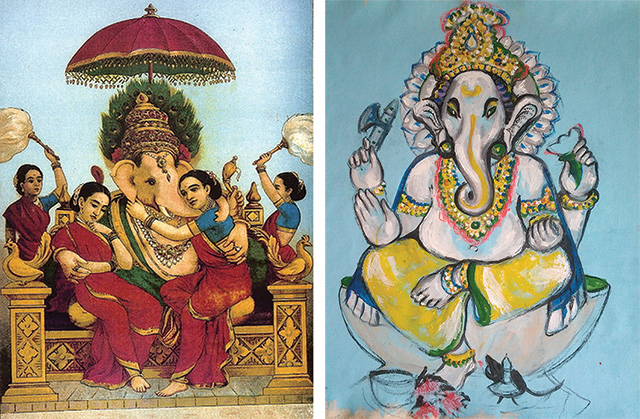 Now, The Global Icon: Ganesha in Fine Art, will be the 6th in the series. This significant sixth has been scheduled to be staged as a blockbuster at the ION Art Gallery (Singapore) from 14 to 20 May 2014, with the High Commissioner of India in Singapore (H.E. Mrs Vijay Thakur Singh) as the Guest-of-Honour of its official opening preview on 14 May 2014; and with the Singapore Art Gallery Guide as its Media Partner, the Indian Women’s Association Singapore as its Principle Supporter and the Singapore NRI Buzz as its Media Supporter.
The image of Ganesha surpasses all possible cultural boundaries across nations and creative genres. In the same spirit, every participating artist of this exhibition re-examines this indubitably-popular concept, to create artworks that do justice to the distinctive physical and metaphysical versatility that it effortlessly offers. The exhibition is indeed international as it will feature paintings of Ganesha by senior and emerging artists from Singapore (of Chinese as well as Indian origins), France, Sweden, Palestine, Taiwan, China, India and Sri Lanka. The participating artists are Sun I-Yu, Gnana Dickam, Joyotee Ray Chaudhury, Rasha Eleyan, Dr S. Chanthiran, J. Kalidass, Gloria Keh, Ika Forssell, Odile Moulin, Sonali Mohanty, Shyama Nadimpalli, Kalpana Yuvarraaj, Raja Segar, Sheikh Hifzul, and Richard Chen.

It is always intriguing to identify the many phases in the journey of a specific icon or image, whereby it is constantly appropriated and transited, from perspectives that are cultural, sociological, political and aesthetic in nature. As a god, a deity within the realm of the sacred, it is logical in accordance with regular temple worship that the image of Ganesha is portrayed in the form of a consecrated sculptural icon in the sanctum of a Hindu temple or in the form of a consecrated sculptural icon made of bronze. In the realm of the profane, the second half of the 19th century saw a major contextual shift in the cultural biography of Indian images in general. Raja Ravi Varma is regarded as a significant artist who brought about the birth of a new identity for images of Hindu gods within popular culture. It is a fact that in many literary or pictorial interpretations of the history of modern and contemporary art in India, Ravi Varma is referred to as an instrumental figure who triggered a historic trend that led to the emergence of modern art in India. For example, his depiction of the image of Ganesha in his 19th century-painting entitled Ganesha with Consorts Riddhi and Siddhi, does signify the beginning of an era of the re-contexualisation of the image of Hindu divinity, moving away from the image’s sacred identity. In this painting, Ganesha is depicted in a manner that is similar to that of a human royal authority (in contrast to his traditional position as a sacred icon in the sanctum of a temple). This is evident due to the portrayal of specific attributes of typically Indian royal regalia such as the embellished umbrella that acts as a shelter for the image of Ganesha and the flanking helpers who play the role of manual fans.

The interesting feature about the interpretation in this painting is that Ganesha is shown to be embracing Siddhi (the female personification of success in Sanskrit) and Buddhi (also known as Riddhi; the female personification of knowledge in Sanskrit), who are considered to be his consorts. In popular representations, the image of Ganesha is portrayed as a ‘bachelor’, a deity with no consorts. Therefore, this particular interpretation by Raja Ravi Varma, in popular context, is exceptional indeed. Furthermore, in this painting, Ganesha is depicted in a moment of worldly situation and recreation, relishing a private moment with his consorts. Technically, Ravi Varma’s signature style of interconnecting Indian mythological subject matter with what is described as western academic realism is readily recognisable here.

Speaking of commoditization, the art market is undoubtedly the entity under which the image of Ganesha has attained a dynamic commodity identity. It is not the intention or scope of this exhibition to concretely place the featured collection of art depicting Ganesha within the context of the multi-dimensional genre of modern and contemporary Asian or Indian Art, but instead, to present a delightful ocular experience of witnessing and relishing the many captivating visual representations of the Ganesha image, within its continuing cultural biography. The area of modern and contemporary art has its distinctively peculiar characteristic as an entity that entails the ever-mighty perspective of an artist who is able to merge his/her own individual style, technique, personal/social affiliations and visual approach with the identity of the image of a popular divinity. Indeed, in this respect, the image of Ganesha has been gloriously globetrotting! The cursive, undemanding and accommodative structural personality of the very form of Ganesha so magnanimously presents the artist with many a possibility in the ethereal zone of unending creativity. The Ganesha collection of Gnani Arts’ The Global Icon: Ganesha in Fine Art stands proof to this, splendidly.