The Hands on Approach 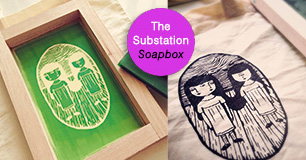 The exhibition’s curator and brains behind Monster Gallery, Joseph Chiang, tells us what to expect from the exhibition, and his obsession with printmaking.

Chelsea Chua: What made you decide on the theme: Daydreams and Nightmares?

Joseph Chiang: I wanted to force myself and the other artists to delve into the extremes of brightness and darkness in our art. I wanted them to draw inspiration from their hopes and dreams, as well as their fears and despair to create something unexpected.

CC: Why do you think manual printing processes like letterpress printing and silkscreen printing have enjoyed a revival in recent years? Is there a particular reason why you’re drawn to these processes yourself?

JC: With the technology and computer softwares we have today, we have almost forgotten about the sheer joy of using our hands to do even the simplest of tasks. As more and more things become automated, the idea of going back to basics and using your hands to create things becomes even more appealing.

I grew up in the era before the computers, then got sucked into the computer age as I worked in graphic design and computer animation. It came full circle when I got sick of staring at the computer screen the whole day and decided to switch career and do something that does not require me to use a computer. Printmaking was the perfect choice for me.

CC: There’ll be a series of silkscreen printing workshops to accompany the exhibition, and I believe that you’ve generally had a good response to similar workshops that you’ve held in the past? Do you think there is a growing demand for such ‘craft’ workshops?

JC: I believe it’s the same reason why I decided to dump the computer and started working manually again. People are just tired of working and staring at their computers the whole day they find it refreshing to start working with their hands again. As technology becomes more advanced, more people are going to find it appealing to return to basics and do things that a computer cannot do, hence the demand for such ‘craft’ workshops. These classes draw mostly people who are either seeking a refuge from modern technology, or those who are longing for a time before the computers take over the world.

Monster Gallery will be conducting a series of silkscreen printing workshops on
22, 23, 29 and 30 August. Admission to the workshop is $12.
Email registration@substation.org for details.