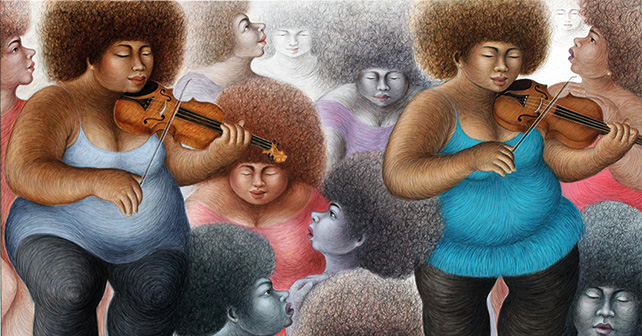 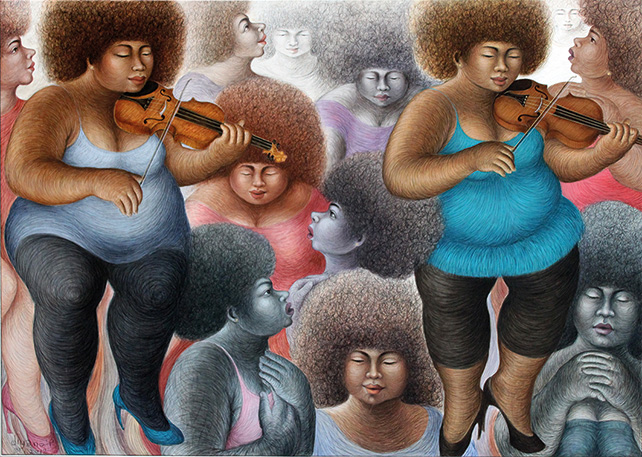 Diyano Purwadi is a contemporary artist who focuses on illustrating the human form. His unique art style involves the use of highly visible curved lines. Whilst this technique gives his figures a more three-dimensional look, it is also a homage to his time as a student, during which Diyano observed various scratches on the surface of his table at school. The graffiti of his boyhood served as the inspiration for his special art technique.

Born in 1971, Diyano’s earlier art pieces are distinctly different in terms of his interpretation of physical bodies. In the past, the people he painted were emaciated, and his use of colours were vibrant. It is fascinating to see Diyano’s maturing of his artistic style to painting of voluptuous figures in more subdued colours and using pencil, pen and/or charcoal to create his signature swirled lines. 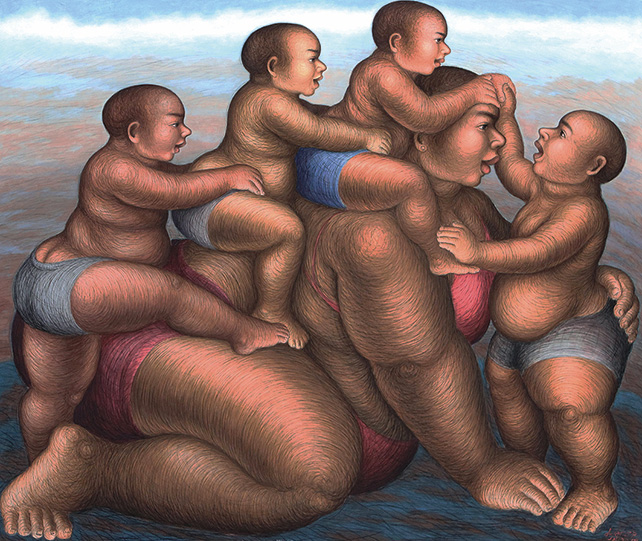 Diyano’s newer art pieces revolve around themes of family togetherness, fertility and abundance. Inspired by his village in Bandung, Indonesia, Diyano paints the simplicity of life by depicting figures with nature.

One of Diyano’s newer pieces, entitled Biola, stands out from his other works. While most of his works feature bald-headed human figures of varying age, Biola’s main subject is a woman with a large afro, pictured several times as she explores her self-identity. Most of these separate incarnations have their eyes closed with a serene half-smile on their lips, with their heads slightly bowed. One figure in the bottom right of the painting has her hands clasped together to her chest as if in silent prayer. This is a piece where one can discover various thoughts and expression of the main subject by taking time to understand the painting.

Diyano’s work continues to evolve, while staying true to his original inspirations. As he sharpens his skills and moves on to depicting different concepts and ideas, we eagerly anticipate more that he has to offer. Join us at the Singapore Art Fair this November to experience Diyano Purwadi’s works presented by The Art Fellas.