The Singapore Night Festival Returns with ‘Glitz and Glamour’ 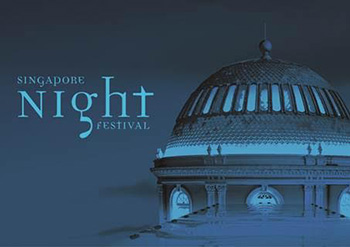 Singapore Night Festival 2015 returns to light up our city centre with a spectacular line-up of provocative light art installations, glamourous acts and breath-taking street performances. An ode to our nation’s golden jubilee, the eighth edition of the festival will showcase an ensemble of world-class entertainment presented by the stellar gathering of Singaporean and foreign artists and performers set to the theme of “Glitz and Glamour”.

Festival Director of the Singapore Night Festival and Director of the National Museum of Singapore, Ms Angelita Teo, said, “The Singapore Night Festival has become one of the region’s most anticipated events. This year in particular, we are excited to celebrate Singapore’s Golden Jubilee with the rest of the nation. With over 60 festival partners in the Bras Basah.Bugis Precinct, visitors can look forward to an exciting line-up of light art installations, immersive activities and show-stopping performances that will transform the festival grounds into a glittering constellation of local and international acts against the night sky.”

Against the dramatic façade of the Singapore Art Museum, Starlight Alchemy combines their distinct storytelling voice and multi-disciplinary flow arts style to present an exciting new work. With a variety of large aerial custom-made fire props and LED technology performance props, Singapore’s premier fire and light performance artist group will take the audience through a mesmerising and heart-thumping journey filled with thrills, stunts and fire tricks.

International music theatre company, Theater Tol, will bring to life a surreal world of dancers, musicians and even a spectacular aerial carousel of angels culminating in a visual spectacle for the Bras Basah.Bugis Precinct. Their contagious energy will draw festival-goers into their revelry as they parade from Armenian Street to the National Museum.

As an anchor piece for diverse light art installations under Night Lights, keep a lookout for the appearance of the world’s smallest and beloved Inuits – Anoo and Nooki – in a specially-created façade projection by French graphic designers David Passegand & Moetu Batlle for the festival and Singapore’s Golden Jubilee. Titled The Anooki Celebrate Singapore, be amused by the characters running amok all over the façade of the National Museum, and enthralling audiences into dancing and singing along with their captivating tunes.

To complement the many outdoor light art installations and performances, one of the flashy new features of the festival is the House of Glamour. Situated on the field opposite The Cathay, the House of Glamour will host ticketed shows for an intimate crowd. It presents an eclectic mix of stand-up comedy, improv acts, puppetry, cabaret and music by home-grown talents such as beloved Singapore-based theatre company How Drama, puppetry maestro Frankie Malachi and renowned drag queens Becca D’bus and Kumar.

To lend festival-goers new eyes in perceiving arts and culture and allow them to have a more personal and hands-on experience of the festival, Singapore Night Festival 2015 will take one step further to explore the science behind the arts, with Behind the Night. The series of ticketed workshops and artist’s talks allow audiences to get up-close with the different artists for a better understanding of their creative processes, perspectives and techniques.

Culinary delights meet jiving tunes meet hipster flea markets at the buzzing Festival Village that will take centrestage at the Singapore Management University Green. The Festival Village this year will feature independent local food ventures showcasing a wide array of unique tastes and delicious delights that will tantalise and satisfy even the most discerning of palettes. Festival-goers can also boogie to the tunes of accomplished buskers who have gone from street to stage, their performances a testimony to the hard work they have put into their craft.