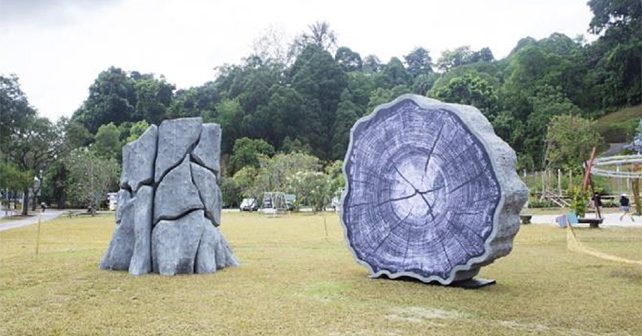 The National Arts Council (NAC) has announced three new public art commissions that commemorate the Singapore Bicentennial. The artworks by Singaporean artists, Crossing Shores by Speak Cryptic and The Time Tree by Robert Zhao were already unveiled by Ms Grace Fu, Minister for Culture, Community and Youth. The third artwork will be launched later in November.

The artworks were commissioned by the Public Art Trust (PAT), an initiative by NAC to encourage appreciation for public art, and to commemorate the 200th anniversary of the founding of modern Singapore.

“The challenge put forth to the commissioned artists was not only to push their artistic boundaries and further their craft through a different medium, but to also draw reference from bicentennial themes such as multi-culturalism, openness and self-determination to commemorate this historical milestone. The artists have responded to the call in ways that have impressed the members of the advisory panel. We are confident the public artworks will enliven community sites, stimulate imaginations and delight visitors of all ages with their sense of play,” 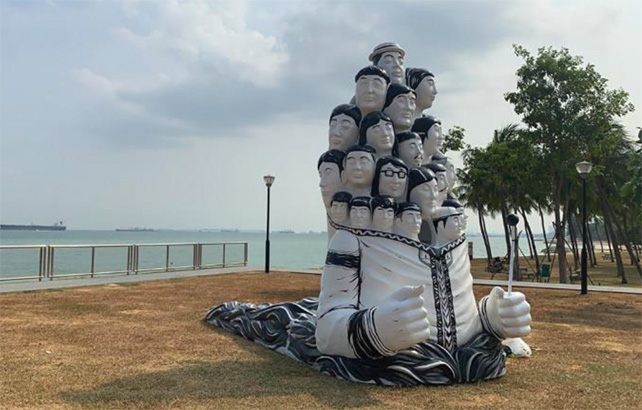 The first work is Crossing Shores, a visually striking 4m high sculpture which pays tribute to Singapore’s unique racial and social fabric. It explores the theme of migration, an important aspect of Singapore’s history. The work reflects the island’s diverse ethnic makeup – from Sir Stamford Raffles’ arrival on our shores in 1819 to the influx of early immigrants and also makes connections to how Singapore developed into a free port. Set against the backdrop of the sea at East Coast Park, in a space that many Singaporeans have shared memories of, the artwork serves to remind us of how a nation of diverse faces from different lands worked together to build a home, and calls for stronger social integration in contemporary times. 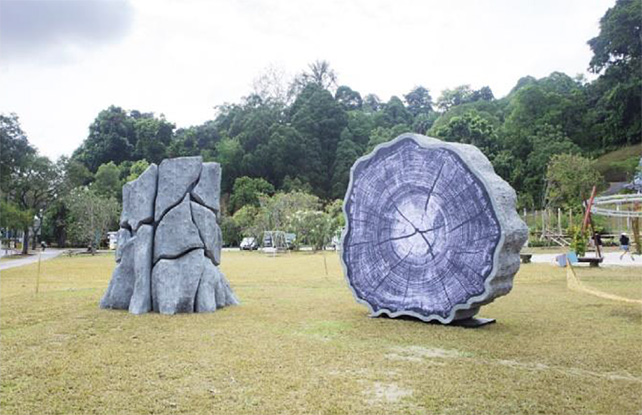 The Time Tree by Robert Zhao at Jubilee Park

The second work to be unveiled is The Time Tree which imagines what a tree older than 200 years might look like in Singapore. The age of the imagined tree, beyond the 200 years of Singapore’s bicentenary, is an acknowledgement of Singapore’s pre-modern history and the plurality of narratives that go beyond the colonial era – reflecting the tenacity and resilience of Singapore, and the myriad of possibilities in imagining a nation through the lens of natural history. The large-scale installation comprises an upright tree stump and a cross-section of the tree that shows its ring patterns. Produced in collaboration with AVS Printing Pte Ltd, the work of this scale is one of the largest 3D-printed public art installation in Singapore. The close collaboration between an artist and fabricator enables a new medium of public art to be explored, signaling new creative possibilities of what public art can possibly be. While the use of technology served as a solution to produce such a large scale work locally, the making of The Time Tree also adapted traditional craft by involving a traditional furniture maker to recreate the texture of the bark using a fibreglass mould that has not been used since about 10 years ago. This collaboration reflects the perfect harmony of new age technology and the perseveration of older traditions.

To ensure that more Singaporeans can visit and enjoy the artwork, Zhao’s work will travel across the island and pop-up in three public sites, starting from Fort Canning Park, (end-August to September 2019) and Jurong Lake Gardens (October to December 2019). It will eventually be installed in the heart of CBD – Raffles Place Central Square from January to March 2020. At night, the work will also be illuminated from within, offering a new perspective and evoking a different mood.

As part of fostering deeper engagement, the PAT will be working with partners to organise public programmes to share insights into the artistic processes behind the artworks, as well as the connection with the bicentennial themes. This includes family friendly on-site activities organised by Eyeyah!, artist-led experiences such as a nature walk by Robert Zhao, and workshops at multiple partner venues including 3D printing workshops at PIXEL Labs @ NLB. To deepen further discourse, the NTU Centre for Contemporary Art (CCA) will be holding a talk with both artists on the contextualisation of the works and why public art contributes to the Bicentennial imagination. Non-profit arts group Art OutReach Singapore will also be developing an assembly talk programme for Primary school students as part of a targeted schools outreach.

Coming up in November, the PAT will be launching the third commission in Punggol, titled Five Stones by Twardzik Ching Chor Leng, as part of NAC’s Arts in Your Neighbourhood programme. More details on this exciting interactive work will be announced later. In addition to commissioning opportunities, the PAT continues to build artistic capabilities and advocate best practices in the development of public art. From 17 to 19 Oct, NTU CCA, with support from the PAT, will be organising a Public Art Education Summit that aims to stimulate debate and reflection on global and regional discourses of art in public space. The conference features keynote presentations by renowned scholars, artists and curators, and focuses discussion on art-led urbanism, place-making, community building and social practice.