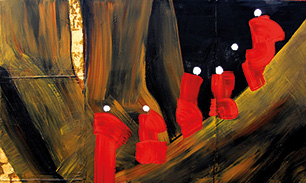 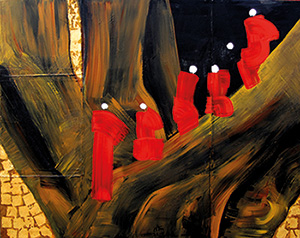 Since the end of the military rule in 2011, Myanmar has entered a transition period bringing great expectations and countless risks. Curated by Intersections, with the support of One East Asia, “Through Women’s Eyes …” reflects the uncertainties about the path that the country will follow in a new context of openness, and political and economic changes. 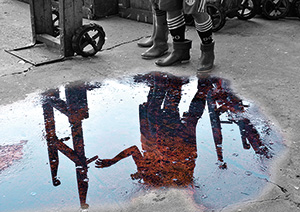 The five female artists represented in this exhibition, Myint Myint Tin (1944-), Phyu Mon (1960-), Nann Nann (1974-), Nge Lay (1979-) and Zoncy (1987-) belong to three different generations. Each of these women artists has a distinctive style, and preferred mediums and techniques. However, they share a visual vocabulary deeply anchored in local tradition and culture: Buddhist imagery and symbolism, for instance. Despite the mutations affecting the society, they strive to stay faithful to Buddhist rules and family traditions. 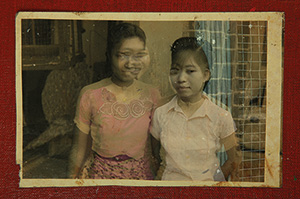 The artworks created for this exhibition by Myint Myint Tin and Nann Nann, suggest their concern regarding environmental issues and Buddhist faith: is the long-awaited economic development going to jeopardize the natural resources and the environment? Will Myanmar’s traditional values and lifestyle, which so far have been preserved, be able to resist the steamroller of globalization? 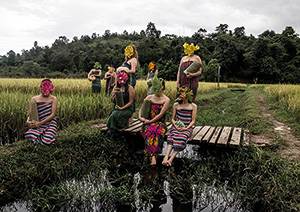 To illustrate their attachment to traditional values, particularly Buddhist values, Myint Myint Tin and Nann Nann use painting, a traditional medium. Meanwhile Phyu Mon, Nge Lay and Zoncy adopt photography to express the ambivalence of the current situation and the uncertainties weighing on the political and social future of their country. They also choose photography as a medium meant to record personal and collective memory and because they feel socially responsible of keeping the remembrance of both the past sufferings and cherished values. 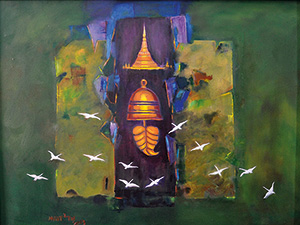 To depict the role of memory and how time passes, Phyu Mon subtly plays with light and silhouette’s reflection in water puddles as well as in the windows of the city’s facades. Nge Lay creates superposition by using old and new photos, and by overlaying faces of women from the past and from the present time. Zoncy’s photos address femininity, the role of women in society as well as ethnic belonging.

The aesthetic nature of the artworks modestly conceals the conceptual character behind the work of this group of artists who have never ceased to question the role of women in Burmese society in their practice. Through these women’s eyes, we catch a glimpse of a better world in which the future would be built without erasing the past, and where tradition and modernity would be reconciled.