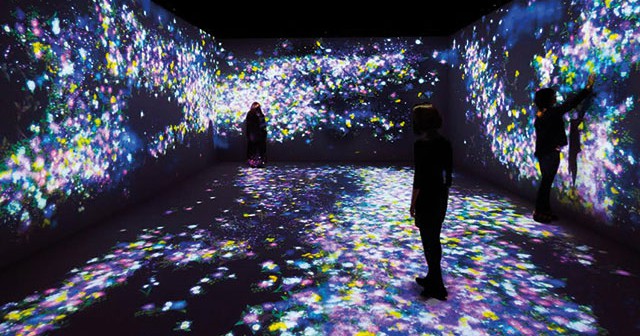 Galleries often appear as quiet and intimidating spaces, with hardly a visitor amid the vibrancy of the art. Yet galleries are still staying afloat. SAGG guest author Renee Poh examines how the industry is staying resilient. 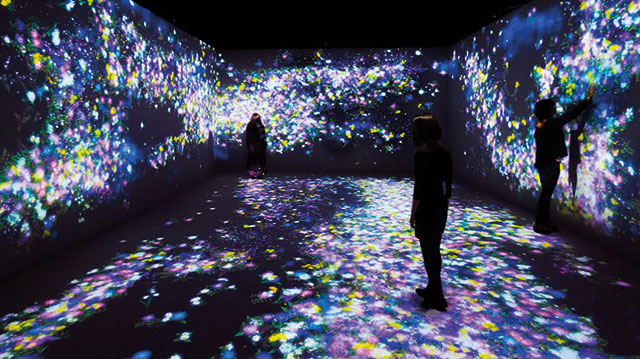 After stumbling through a pitch black maze, reaching the end is a sight that will make one gasp. Stepping in, one is greeted by a surreal, Alice In Wonderland-esque garden of blues and pinks. Flowers bloom at the slightest touch and step, and music reminiscent of fairy dust echoes through the room.

The colourful, stunning dreamscape was part of a group exhibition by Ikkan Art Gallery, which concluded its run in February. However, the eye-catching installation by digital artists teamLab failed to dazzle visitors. No more than four people were spotted touring the exhibition that day. Gallery owner Ikkan Sanada cuts a lone figure at his laptop at the entrance of Artspace@Helutrans, a warehouse space located at Tanjong Pagar Distripark. “It’s usually very quiet on weekdays,” he says matter-of-factly.

His neighbour at that time, ReDot Fine Art, was not having it any better. There are no visitors, and walk-ins are rare, according to gallery assistant Mandy Leong.

This “ghost town” is not exclusive to Artspace@Helutrans. Other gallery enclaves in Singapore, including the sprawling 6.4 hectare Gillman Barracks – roughly the size of nine football fields – also see few visitors. Its most recent addition, Yavuz Gallery, gets a mere 10 to 20 visitors on weekdays. Exceptions arise during weekends and exhibition opening nights, where galleries see larger crowds of up to 50 and 400 respectively.

Even centrally located galleries in the Raffles Arcade cluster do not see many visitors, saying footfall is unpredictable. “I can be sitting by myself for hours, or I can come in and see people standing at the door,” says Ms Samantha Segar, director of Chan Hampe Galleries.

Low gallery visitorship has been a cause of concern for the government. Former Nominated Member of Parliament, Janice Koh, raised a question in Parliament on Gillman Barracks in 2013 about measures to enliven and raise the profile of the arts hub. This came after a slow opening year that saw little foot traffic, which made headlines in the media.

These challenges have not deterred galleries. Many have been attracted by the growing art market to open spaces in Singapore. The Singapore Art Gallery Guide website currently lists 160 art galleries – including online galleries, a 45 % increase from 110 in 2005. However, not all is rosy, as more events fight for an audience.

Ms Segar says: “The number of people attending openings has fallen, as there are other openings happening elsewhere at the same time. People have to make choices now.”

Rising operational costs have also affected several galleries. In the past year, both Kato Art Duo and Chan Hampe Galleries have downsized their gallery spaces by half, while John Erdos Art in Dempsey has closed. And Art Plural Gallery, previously located on Armenian Street, closed down in May after four years of operation.

The Straits Times also reported in April that five out of the 17 galleries in Gillman Barracks, including Tomio Koyama Gallery and Silverlens, did not renew their leases, and exit the art enclave after they expire.

Photographer and founder of IMMAGINI Art Gallery, Billy Mork, who has been running a small space in Joo Chiat for the past three years, is one who concedes that business has been difficult for him. Although he ensures that his monthly overheads do not exceed $6,000, a small sum compared to big galleries, he has not broken even. “It’s not easy for a gallery to survive in Singapore. Until today, I don’t make money. But I hope to still carry on for a couple of years, because it’s part of my passion,” he says.

Others, like the galleries at Tanjong Pagar Distripark, are trying a different business model. They moved out at the end of February to make way for a revamp of Artspace@Helutrans, and now come back occasionally to do temporary pop-up exhibitions.

Mr Xu Weilun, the manager of Artspace@Helutrans, says that this arrangement “makes more business sense” for its tenants. If galleries do four shows a year, with each show lasting two months, they pay only eight months of rent, as compared to a full year. This is a concept that gallerist Stephanie Tham prefers – Galerie Steph had already left the permanent gallery space last September. “I like the idea of doing pop-up shows. Also, the cost of running a full-time gallery is tremendous,” she admits.

Nevertheless, the doom and gloom fails to overshadow the optimism. Most galleries say they have been doing fairly well, though they decline to provide sales figures.

Mr Ho Sou Ping, founder of Artcommune gallery, managed to break even within two years after sinking $50,000 into his gallery five years ago. He relocated to Bras Basah Complex in 2011, into a space twice the size of his previous gallery in Chinatown Point. To cope with the higher rent, he now sells higher-value works by established Singaporean artists. “When I first started, my paintings cost $1,000 to $2,000. An average painting now costs $15,000 to $20,000. I’m still surviving,” he says. 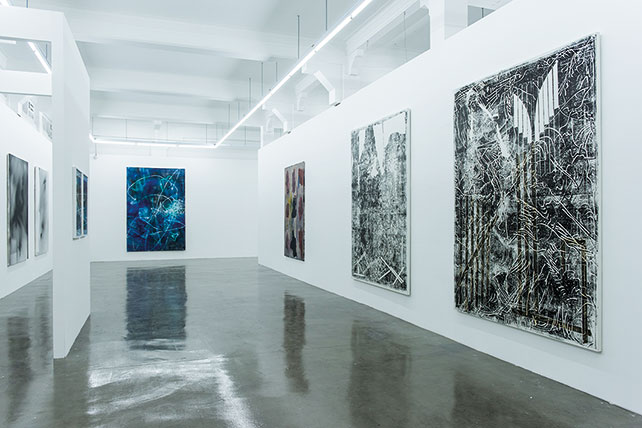 ARNDT expanded its space at Gillman Barracks from 150 to 350 m2 last winter
Installation view of “I Know You Got Soul”, shown till 21 June 2015

At Gillman Barracks, other galleries have indicated signs of brisk sales. Ms Santy Saptari, deputy director of Pearl Lam Galleries, says: “Some collectors buy at the opening of the exhibition, while others buy even before the opening. We also get occasional walk-ins for more affordable pieces.”

Others, like ARNDT and Ota Fine Arts, have also expanded their spaces. Some galleries have done so well that they have even diversified their business.

Galleries have also branched out into providing consultancy services, dealing with the secondary resale market, and working on commissioned projects with corporates and institutions.

When Ms Marjorie Chu started Art Forum in 1971, one of the oldest galleries in Singapore, she also started a custom framing business to supplement the gallery. She says: “I realized that any service you provide always gives you a basic income. Galleries must understand their business model – analyse, research and create a demand.”

In a rapidly expanding industry, it seems paramount for galleries to stand out. But surprisingly, most galleries do not see their peers as competition. Herman Salleh, gallery manager of Kato Art Duo, says: “Galleries carry different types of artworks. Every artwork has a different kind of audience.”

For many galleries, a recurring statement for success ultimately depends on the gallery’s ability to showcase good quality works and build good relationships with its artists and clients. Galleries also feel that beyond meeting the bottom line, their role extends towards education.

Ms Vera Ong, owner of Art-2 gallery, says: “A gallery exists to promote art appreciation in the community, and enhance the value and understanding of art and culture in Singapore.” 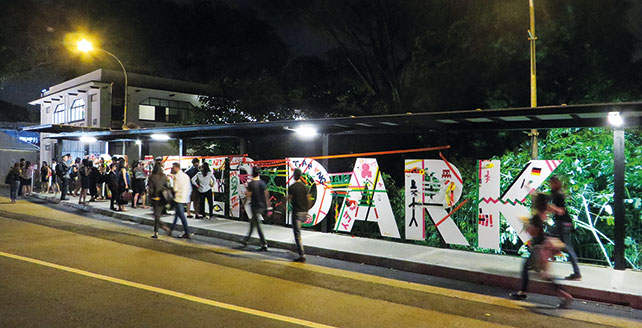 Art After Dark at Gillman Barracks

Gillman Barracks echoes this view. In the past six months, the art enclave has stepped up its programming efforts in an attempt to reach out to a wider audience.

It launched a biannual open house event, Art After Dark, last September, a move that has seen visitor numbers increase from 2,000 to 6,000 at Art Week 2015 in January. Due to overwhelming response, Art After Dark is now held once every two months. Gillman Barracks also introduced weekly public docent-led tours at the start of the year, which have been very well received. Ms Kow Ree Na, director of the lifestyle programme office at Economic Development Board, says: “People are getting increasingly aware of Gillman Barracks because of our regular events and an increase in outreach efforts, as well as word-of-mouth.”

Their promotional efforts have not gone unnoticed by the galleries. Ms Diana Tham, former project manager of Pearl Lam Galleries, says: “Gillman is definitely getting more hype, more people know about Pearl Lam Galleries as compared to last year. And it’s not just collectors, but also the general public.”

For now, galleries seem to have found their footing. Most galleries interviewed plan to stay in their current spaces in the near future. Yet Ms Segar pipes up. “But with things changing so quickly, you have to be nimble.”